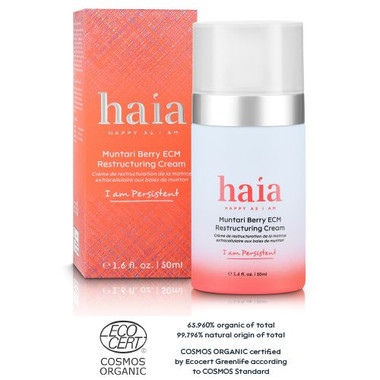 A rich, hydrating and yet matte-finished moisturizer designed to infuse the skin with a host of antioxidants, skin brighteners and phytonutrients that help support a healthy Extra Cellular Matrix (ECM). The ECM is the underlying structural support mechanism responsible for optimal skin health, wellness and a radiant appearance. Use also as a deeply-hydrating and restorative night cream.

Hero Ingredients:
Muntari Berry – a rare Australian berry that is known for its antimicrobial, soothing, anti-inflammatory and age-deferral properties. Muntaries promote skin radiance while deeply hydrating drier senescent skin.
Desert Peach (Quandong) - a wild fruit also known as Quandong, is native to the desert regions of central and southern Australia. Quandong was a staple food for the Pitjantjatjara people for over 50,000 years. Hand harvested and dried, the fruit and crushed kernels were used as an alternative to meat. The kernels contain 25% protein and 70% complex functional oils.
Gallic Acid – a new generation of skin melanoregulator molecules activated by the stratum microbium. It contains the patented THBG ingredient (Tri Hydroxy Benzoic acid alpha-Glucosides). Once applied on skin, THBG is partially converted by the skin microbiote into THBA (Tri Hydroxy Benzoic Acid – a natural inhibitor of tyrosinase), which acts in synergy with THBG to control the skin color.

This product hasn't received any reviews yet. Be the first to review this product!

All prices are in USD. Copyright 2022 Great Things Boutique - The Lodge At Woodloch. Sitemap | Ecommerce Solution by BigCommerce